I was on holiday for one week ending the 18th of March. I travelled to the capital of to be with my Brazilian friends. For some reason, deciding to go for the holiday took me a whole three weeks. All the same, while I was on holiday, I realized that it had been a much needed one.

During the holiday, I went to Noordmark’s Chapel with some of my friends in . This was a chapel put up by students so as to meet the spiritual needs of people going to the hills to ski or to walk during Sundays.

When we got to the chapel, I noticed that the atmosphere was so different. It was suddenly quiet and all of us went to the altar where we had a time to pray together. That is when I realized that whoever came up with the idea was guided by God. We had been walking in the snow for a while and rest was very necessary. The chapel provided more than that. We had a place to worship as well.

This was one of my serene moments in my life since I came to . It was very refreshing, and am thankful for the chapel. 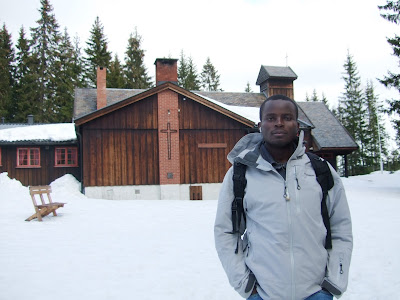 The chapel in the background after having praying together. 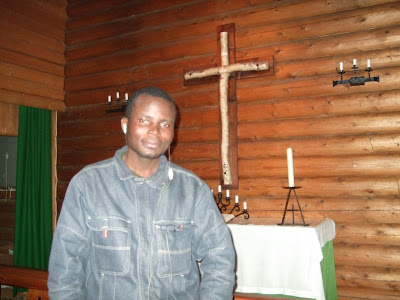 I also went to a Norwegian course with my friends. The teacher was called Rita. She is one of the kindest ladies I have met. She is a retired teacher that has offered to help teaching my friends in . It was prior to Easter and she gave a card as a gift for Easter. Her gift reminded me not only of the death of Jesus at the cross, but his triumph as well over death. Praise be to his name.

Posted by Joseph Opanda Namutala at 6:14 AM